this time last week i was lucky enough to be on a workshop with Matthew Harris. there were 5 of us in Matthew's cosy studio. called 'from parts to a whole' we were asked to bring something to take apart! (Siân has been on one of these workshops dismantling an umbrella). anyway i took an old jewellery box of my mothers which had seen better days and i did not use. 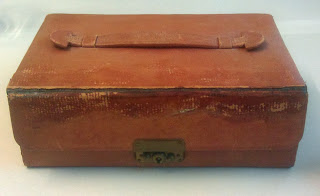 it is leather, faded and repaired.

the object was meant to be mixed materials and anything with a history but not clothing. our group had a plug, dictaphone, book and gas mask amongst the items.
the first thing to do was to dismantle the box and save all the pieces. 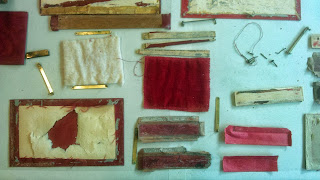 i found it quite difficult as the box had been very well made so it took quite a while but eventually i had something to work with.
so from then on the workshop was run like a game all dependant on the roll of a dice. we worked through various criteria from choosing 3 different pieces to make a drawing instrument to what to draw and how to make items from the pieces by joining.
on day 2 we could expand and concentrate on a particular items or way of working we had particularly liked from the day before. i had made a bundle of 3 pieces and was keen to see what i could create with further bundles.
i made myself a set of rules!
pieces were placed in their materials type and chosen with the roll of the dice. then it was to see whether to keep them whole, cut down or pleated/folded. after that it was whether to make them into bundles or link them. then what to wrap or tie with and how many times..... it could go on forever but these are what i made.
i was also keen to explore the shapes made and wanted to spray them in true style, to see the voids left behind. so i wouldn't loose the colours i sprayed the reverse but i am really pleased with my reverse images. 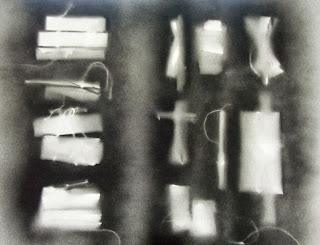 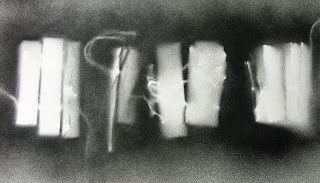 i am sure this is leading me somewhere! i am quite excited about them so ..... i had a great time and Matthew was a perfect host and very generous with his knowledge. i recommend it to anyone.
Posted by Max the Lobster at 06:35 5 comments:


For my study of three textile artists I have chosen three men. The fact that they are men is pure coincidence, it just so happens that I admire their work. They are all connected, I believe, in their working practises by the use of many small parts to make a whole which is an element that runs through my own work.


Matthew Harris is the nearest of the three to a pure textile artist and hand stitcher, although he exhibits his drawings in their own right. Michael Brennand Wood does use pure textile and machine stitch, but also uses found media. El Anatsui is the outsider as he is technically a sculptor producing items from a found non-textile material which look and appear as textiles when complete.


All three take great care to title their work as part of their working practise.

Matthew Harris
I first discovered Matthews work in 2006 at Stroud as part of the ‘Stroudwater Textile Festival’. A large hanging cloth called ‘Crumb cloth iii’ took me totally by surprise; stripes, splodges of ink, tiny repetitive Frankenstein stitches and cut-outs; all the elements that excite me.
I’m sure they are not simple to produce, but in a sense they are minimal in their technique and although he says “I have never been interested in perfect textiles”, they are carefully planned and precisely executed; “Cloth made imperfect.”

He has a strict method of working starting with preparatory drawings or as he calls them ‘cartoons for cloths’. On his website you can see the templates/stencils he uses for some of his cut shapes. Like the finished textile his drawings are constructed from many layers. The paper of the drawings is often transparent so you can see the layers beneath. His textiles echo this technique and although the substrate he works with is heavy cotton twill, and so not transparent, it is worked in such a way as to reveal under layers.
The cotton is dribbled with dye, printed and brushed to achieve his desired restricted palette. It is then folded, pleated, cut and stitched, reminiscent of Japanese Boro textiles or an old much loved patched mattress. The action of pleating and joining shifts the marks made to give a visual disruption to the viewer, an abstract juxtaposition.

Technically Matthew cannot be described as an embroiderer as most of his stitches are functional, holding all the layers together. Occasionally random machine stitched ‘embellishment’ appears on his work, as is visible in his current exhibition at Stroud. Part of the ‘Slow Revolution’ these cloths take time to complete.

In 2008 Matthew undertook a new commission for Colston Hall in Bristol. Working with totally new materials, ‘Scorched’ is based on graphic experimental music notations. The marks are cut and burnt into the wood panelling on the ground floor entrance area but still very much working with many small elements. This is a complete circle for Matthew; the Crumb cloth series based on the work of George Crumb, the American composer, echo the work at Colston Hall.


I can’t say that I particularly like Michael’s work but there are elements of ‘the wow factor’ and I can appreciate the construction. They are busy, vibrantly coloured, and push the boundaries of conventional embroidery.


Michael’s career has spanned forty years and his work is forever changing (‘Forever Changes’ - Ruthin Craft Centre). One era leads to another with elements from each running through to the next. Looking at Michael’s work you could convince yourself it was ‘outsider art’; he is somewhat unorthodox. However unlike most outsider artists he studied embroidery on a conventional course. Right from the outset he explored the use of unconventional materials such as wood, glue and paint.
Like Matthew he works with layers which can be densely packed so unless you get up close there are elements you would miss. They are often cunningly disguised with paint but once you work out what they are it all clicks into place. These works can be ‘read’ on many levels from the ‘pretty’ to the disturbing. For example ‘Crystallized Movements’ made in 2004 might at first look like a floral construction, on closer examination you realise the lower layer is a field of toy soldiers and flowers are based on poppies and war medal ribbons. ‘Die is cast’ a piece from 2006 shows a field of painted toy soldiers lashed together with thread. The surface is dotted with embroidered mines, death heads and ‘flowers’. If you take yourself down to the level of the soldiers you can imagine yourself in a mine field and all the feelings that would go with that.


Of the three artists in discussion here he is the only one using ‘embroidery’.
Since 2001 Michael has been using small elements of digitised machine embroidery, taking his drawings, scanning them and then machining to create such things as flower heads, skulls, aeroplanes etc. Recently his work has become more three dimensional with images exploding outwardly on fine wires like some elaborate flower arrangement. 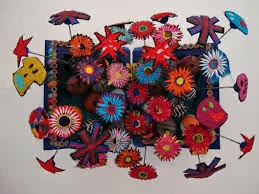 El Anatsui
I thought for this study I would actually find out the correct way to pronounce his name and came across this.


He describes himself as a sculptor but is mainly known now for his large abstract ‘sheets’ constructed from thousands of liquor bottle tops joined together with copper wire; leading to the question’ What is a textile? Much of his own terminology is textile related and many of the pieces are reminiscent of Kente cloth. A cloth made from long strips joined together.

El Anatsui started out working with wood, burning into the surface to create marks, similar to Matthews work at The Colston Hall.

His change in direction happened when he found a bag of discarded bottle tops and collars in the bush. He eventually started experimenting with them, flattening, folding, piercing and joining, essentially stitching two pieces together with the wire and the two ends twisted around each other to construct ‘cloth’. In fact there is a whole palette of bottle top formats from the way they are folded and crushed to the way they are connected into sheets. Some dense some lace like, all having different names.

His working method is very intuitive, placing elements together and re-arranging. He doesn’t make any drawings – “you might make yourself a slave to an idea” he does however take numerous photographs for future reference.
He now works mainly with ‘whatever the environment throws up’ from evaporated milk tin lids and cassava graters to obituary notice printing plates and of course bottle tops. It is amazing that such beauty can come from recycled throw-aways.


This summer was the first time I saw his work in situ as his piece ‘TSIATSIA’   (Searching for Connection), covered the front of Burlington House as part of the Royal Academy’s summer exhibition. Measuring 23m x 15m it is the largest piece he and his team of assistants have ever made.


For this study I worked some samples to imitate El Anatsui's process but instead of using bottle tops i used cut up strips from drinks cans. 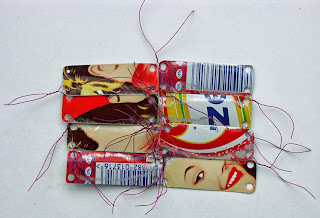 i used coloured wire for joining and left the wire long and wispy. i think my 'heads' are similar in a way to Michael Brennand - Woods practise. 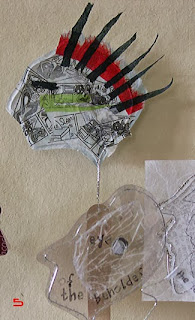 ‘Matthew Harris Material Matters’8 October – 3 November at Museum in the Park, Stroud (check opening times as they are now in their winter season.

Posted by Max the Lobster at 04:51 No comments:

Find it here at aleut embroidery

Aka, Max the lobster is born

I love textiles, I work with historic textiles and I make new ones. Like historic textiles mine use all kinds of media. I love working with paper, metal and re-employed items but I am not averse to trying new materials. I have a 'low tech' attitude to making.

Please respect the artwork on this blog it is subject to copyright and should you want to reproduce anything it would be nice to be asked first!
Thank you 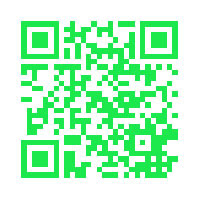